And we're off to the Pilbara! 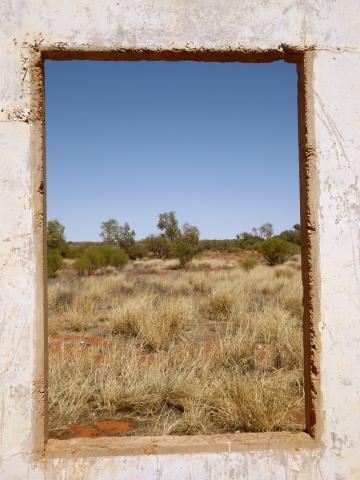 Life is frantic up on the hill at the moment. H is welding up cattle yards on another block, I'm trying to organise our home lives which got a tad scrambled while I was doing pre-book tour stuff, mid-book tour stuff and post-book tour stuff, and keeping up with the permanent job - kid taxi duty. And when I'm not involved there, I'm getting farm books up to date, going through cooking books and ... packing.

A lot of people when they get the chance to go AWOL head to decadent beachside destinations like Fiji, Vanauta, Phuket or, if you're lucky, the Greek Islands. (Mykonos anyone?)

But not us. No, Sireee. (I don't think we'd actually know what to do if we ever got to sit on one of those glorious overseas beaches.)

H and I - plus two two kids and one kelpie - are leaving our farm in the hands of a very capable farm-sitter and we are heading right across the Nullabor into Western Australia and about half way up that state (give or take a few hundred k's or so), where we are going to work the mustering season on a friend's (very large) cattle station in the Pilbara. Cooking, truck driving, mustering - all that kind of stuff. The kids will have a life experience they'll never forget especially seeing their mother and father, who are most definitely NOT teachers, are going to try and teach them for a term (shoot me now

) amongst other things. Although, I have no doubt regardless of our (lack of) teaching ability, by the time we head for home the Farm Boy will be able to tell you his version of how to run a cattle station, drive a Scania truck, fix a bore pump and windmill plus hazard a guess on how to fly a mustering helicopter. The Princess will be an mini expert at yard work whilst painted in hand ground red ochre (she loves the stuff), have the ability to transform beef into 10 million different dishes (where's my old station recipe book amongst all these boxes?), make slices by the slab, and of course, as she is want to do when no one is watching, dance to the chorus of dozens of galahs. Or lots of frogs if it rains. Which it probably won't because the place is scarily close to Marble Bar. H won't want to come home because he'll be in his element (bushie that he is) and neither will I. (This is on-the-ground research for another book. Or two or three.) See, it's a WIN WIN situation here. (Just nobody mention snakes at this point in the conversation and I'll be very happy).

We have a window of opportunity here on the farm as all is quiet until October. Our home place is having a spell from stock, there's no irrigating to do at the other block, no fires to worry about and so, we leave in two and half weeks! Yes, it's a mad scramble even though we won't be taking all that much. According to H, that is. Remember our trip to QLD last year? If you're new around here - a very big hello and welcome! - you might like to look at this and see how I got the car boot closed. This time it'll be a Landcruiser tailgate and H is already giving off all these warning growls of 'it can come, IF and only IF it fits ...'. Obviously I'll have to make sure there's room for me or I might be conveniently left behind. But then he wouldn't have the yummy butterscotch bickies or homemade rolls or chicken casserole detailed below, so I think he'd relent. Just for me. I think ....

Anyway, once we're packed (yes, I will take a photo) and we are on our way, if you hear of a Toyota Landcruiser, a heavy duty trailer, one mum and dad, a pigeon pair of kids, one cattle dog, two motorbikes and an array of swags & all sorts of other stuff "you have to take to camp your way across Australia and halfway upwards" all going missing, you'll know it's us.

Stayed tuned for updates of the mad scramble to leave followed by life in the Pilbara for a family of Victorian hillbillies!

Last week on my Facebook Page I mentioned some Butterscotch biscuits I made from an old recipe of my mum's. I had this piece of paper from her ancient cookbook and had tried every recipe written on it except for these little beauties. I have no idea why it's taken me so long! They are absolutely beautiful. And so, as requested by you lovely Facebook followers, here is the recipe for these yummy bickies which had my younger children asking me, 'Are they called Butterscotch because they're made of butter and that stuff some people drink?'

(I just want you all to know 'some people' is not their mother.)

Bake in slow over approx. 20 minutes

The other recipe I was asked for this week, was for some foccacia rolls I made over the weekend in order to have hamburgers. Because we live a long way from the shops I usually keep bread and rolls in the freezer, but this Sunday night I ran out (head slap!), and knew what little bread I had was needed to make tomorrow's school lunches. What to do? I really wanted to make 'homemade' takeaway. (If we buy takeaway from our nearest town, by the time we get it home it's cold and yuck!) So I scouted around in the freezer for something else but hamburgers had taken hold of my mind. I was kind of salvitating over a nice juicy hamburger stacked with salad. So fixated was I on this treat for tea, I decided to have go at making the rolls myself. Now, I'm no bread maker from way back like some people who read this updates so please feel free to share your own lovely bread roll recipes. In the meantime though, here's mine. They turned out a treat and a half. Please note, I combined a couple of recipes to get this one, and I used an old Breville Baker's Oven Plus Model No. BB250 (750gm loaf).

Here's what I did:

I grabbed my trusty Bread Maker bread pan and poured in 330ml of lukewarm water, folllowed by 500gm of Lauke Bread Machine PreMix Crusty White Bread flour (make sure this covers the water as you don't want the yeast coming in contact with the water), followed by 4gms dried yeast.

I then dusted the dough with said CORN flour. And placed the dough into the bowl and covered it with cling wrap. You've then got to place the bowl in a warm place for about 20 minutes or so for the dough to rise. (I either put mine on the dash of the car, or, if the fire's blazing, on the hearth to the side of the open fire.)

When dough is nicely risen, tip it back out onto your CORN flour covered board and divide dough into roll size portions. Glaze with milk and top with sesame seeds (if desired.)

Home made 'take away' that's YUM!

I was also scanning a few of my favourite cooking websites recently for a nice, mouthwatering, heart warming casserole. I'm not sure about your house, but Saturday's around here seem extra busy and by the time they all off-load coats, hats, boots and pile inside on a Saturday evening after a big day, everyone's STARVING. Soooooo.... I went looking for a new recipe and after a few false starts and the odd cries of 'darn it, why can't they just use NORMAL ingredients', I found this little beauty. It was easy, I HAD ALL the ingredients (ie. they were normal pantry staples) and I served it all on it's own but you could add  rice to make it go further should someone unexpected rock through the back door.

Check out this link for the recipe, thanks to Chef-in-training. I highly recommend it. You could also ditch the dumplings and whack the casserole into pies. BEW-DI-FUL!

I've been trying to read Alice Hoffman's, MUSEUM OF EXTRAORDINARY THINGS, for my bookclub this week but got distracted last week by a great Australian author Robert Schofield and his novel, HEIST. Set around Kalgoolie the book is an action crime read and I tell you, this man gives one of my favourite authors in this genre, Lee Child, a run for his money. (Are you impressed? I was. No one has ever given Jack Reacher a shove like Gareth Ford).) You might remember I hosted Robert on my website some time back when his latest novel MARBLE BAR was released? I hadn't gotten around to reading his first and loosely connected HEIST. I wish I had now! SO glad I remedied my error too! So if you like a good action novel, take a look at Robert Schofield. You won't be sorry.

The other book I recently had the pleasure and great honor of reading was an early copy of my lovely friend Deborah O'Brien's (of MR CHEN'S EMPORIUM fame) new book, THE TRIVIA MAN. Due on the shelves in June this year, look out for this one as you're in for a treat. It's no secret I love Deborah's work and THE TRIVIA MAN is no exception. A cleverly told, beautifully written story which is a quirky and heartwarming tale about finding your true place in the world, set against the backdrop of a weekly trivia competition.

‘Trivia is a serious business, not a social occasion' Kevin Dwyer, the 'trivia man'

Dubbed ‘brainbox' by his peers and ‘weirdo' by his sister, Kevin Dwyer is a middle-aged forensic accountant who has never had a real friend, other than his eight-year-old nephew Patrick. When Kevin joins the Clifton Heights Sports Club trivia competition as a one-man team, and convincingly wins the first round, he is headhunted by the other contestants. But Kevin would prefer to be on his own. That is, until he meets Maggie Taylor . . .

Maggie is a Latin teacher and movie buff, who's good at her job but unlucky in love. In fact, she's still besotted with the man who dumped her years ago. Nagged by her friend Carole about getting out and meeting people, Maggie reluctantly joins the trivia team founded by Carole's husband, Edward.

Over a season of trivia nights, Kevin, Maggie and her team will experience arguments and crises, friendships and romances, heartbreaks and new beginnings. And maybe, just maybe, Kevin will find his happy ever after . . . - See more at: http://www.randomhouse.com.au/books/deborah-obrien/the-trivia-man-978085...

I couldn't put this one down. If you loved the ROSIE PROJECT, you'll adore, THE TRIVIA MAN.

Well that's it. I have to go and cuddle my little Jack Russell, Lucy, as we can't take her with us on our AWOL trip from the wilds of the Gippsland High Country to the wilds of the Pilbara. I'm squeezing in every last cuddle I can but she is in extremely good and loving hands while I'm away so I'll just have to suck it up and cuddle the kelpie, Crosby instead. That's if The Farm Boy will share his best mate with me :) I might just have to pick up another kelpie along the way. Just don't tell H I said that, okay? :)

Take care and happy reading, cooking and farming. And packing ... :)

PS. For all you Apple users and iBooks lovers, THE COWBOY is available on iBooks now. And if you love it, I'd really appreciate it if you left a review. Thanks so much!