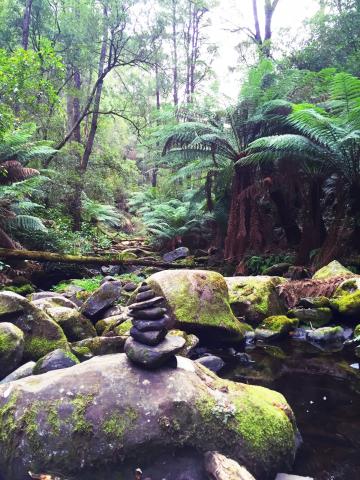 We’re a pretty lucky family. Creativity abounds, be it in song, words on a page, handiwork, metal work, woodwork, jewellery making or even via the lens of a camera.

It was the images taken by our eldest son, Brent, which caused the latest creative hullabaloo. While his mother was labouring away trying to give birth to her fifth full-length novel (seventh if you count the novella’s), this lad was up on a nearby rock peak, taking photos of the sunset with his iPhone.

And what photo’s they were.

He was only gone about fifteen minutes, twenty max. The sun was rapidly sinking when he left, and this kid, who always has his eye out for a ‘good shot’, took off like a Tiger snake was after him, taking the 4X4 and hammering up the hill to take the photo which is the header for my new website.

The beauty of the image epitomises where we live here in Gippsland. The incredible splendour of the surrounding landscape; hills, rolling pastureland and the coupe de grace, Lake Glenmaggie. I can see the lake right now out my office window, the hills surround us and through the gorge created by the Macalister River, the irrigation flats are laid out like an emerald & copper shaded quilt. It’s the country you read about in my stories. And when my website manager, Karen, locked eyes with Brent’s photo’s, the synchronicity of it all, had her developing a new website before she even knew she was doing it.

Gippsland is one of the most beautiful places in Australia; possibly on earth and it is where I am lucky enough to live and write. My ancestors arrived here via Port Albert 154 years ago, trekked overland to a peg placed in the ground in the middle of nowhere where they settled the family farm. It was an impressive feat. Made more so by the fact they had to brave the waters of Bass Strait to get here, which brings me to another stunning image on the home page taken by Brent. He’s an avid surfer, our boy, and Wilson’s Promontory is one of his favourite haunts. When I saw this picture of his favoured beach, all I could say was, ‘Wow. How Gippsland is that.’

Because, you see, we are so lucky in this largely forgotten piece of country which stretches across the farthest southeastern corner of the Australian mainland. It only takes an hour or so for us to reach the beach. In winter, and another hour in the opposite direction, we’re knee deep in snow. We have the largest inland lakes system in the southern hemisphere, the second longest silt jetties in the world, RAMSAR wetlands, luscious rainforests, magnificent eucalypt covered ranges, and a climate that’s labelled Mediterranean.

And our boy captures it all via the lens on his camera.

And I capture it with words on the page.

And hopefully, you, looking at these two elements together, on my website or in person, hear the song of our land – Gippsland - in your hearts.