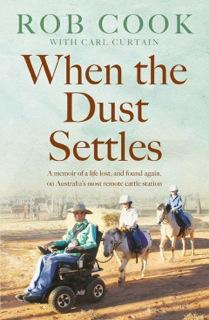 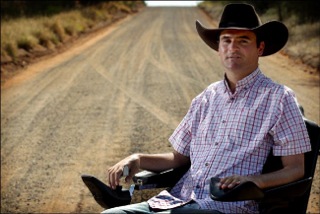 When third-generation cattleman Rob Cook set out on a routine mustering job in a chopper it was a day in the outback like any other, but when the chopper suddenly fell 200 feet out of the sky, smashing into the ground, it was the day that changed everything.

This one-time professional bull-rider had been in scrapes before – he had miraculously walked away from a previous crash in his beloved gyro, but this time it was different. This time there was no walking away. Seven hours later he was rescued from the wreck on one of Australia’s most remote cattle stations, Suplejack Downs, but his journey back to life, to his young family and to a way of life he loved had only just begun.

When the Dust Settles is the extraordinary story of cattleman Rob Cook’s recovery from the catastrophic helicopter accident that left him paralysed – it is also the story of Suplejack Downs Station and one of Australia’s most remarkable and resilient bush dynasties.

I am absolutely delighted to have Rob join me on the Christmas is Coming series ...

Leave a comment here for your chance to get a Christmas Card direct from Rob, or maybe a free book from the giveaway pile. 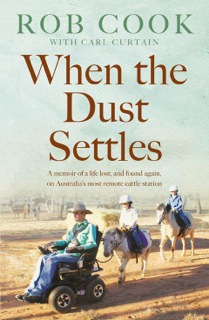 "When The Dust Settles" is a story of courage, determination and most importantly love. It is a snippet of some of the many adventures I have experienced throughout my young life. From the professional bull riding arena, to flying gyrocopters across Australia. It is a first-hand account of the action packed experiences that helped me face life's toughest challenge, Survival.

My greatest achievements in life was marrying my wife Sarah and welcoming two healthy sons into the world. These achievements are what helped me survive a helicopter accident on Australia's most remote cattle station and face life in the seat of a powered wheelchair.

I remember from a young age sitting and listening to both my grandfathers "yarns" so I guess storytelling is a part of my DNA. I have always lived my life with the understanding that life is just like a book. We are the authors and it is up to us to fill every page. However it wasn't until a catastrophic event that led me to my first radio interview with ABC journalist Carl Curtain . Over the years many more interviews followed which created the opportunity for us to join forces . With so much support and interest generated from these interviews it became inevitable that our most popular interview yet formed the pages of "when the dust settles" by Rob Cook with Carl Curtain.

Not that it was funny at the time, however, reflecting on one Christmas at Suplejack downs station certainly is a standout in my memory. Myself and Sarah spent so much time and effort covering the entire main homestead in Christmas lights to create a truly "well lit" Christmas environment for our family. Everything was set for a bumper Christmas in the desert when a severe storm blew in on Christmas Eve. It devastated our Christmas decorations along with one end of the Homestead which was peeled open like a sardine can. The heavy rain flooded the pantry, kitchen and dining room, and the property looked like it had endured a mini tornado. The rain may have dampened the soil but not our Christmas spirit, all of us men rose early and met down in the workshop to put together a petrol driven buggy which was a joint present to all the children from their grandparents. I dressed up as Santa Claus and dad was my trusty elf, we managed to find a cowbell which was ringing loudly as the elf drove the buggy with Santa Claus standing up in the back with a bag of presents. Even though one of the kids pulled down my beard and jumped back shouting "it's uncle Rob" we still had a wonderful Christmas.

I think the best present I have received was something my brother Brad made me after I sustained my permanent injuries from the helicopter crash.

He shaped a piece of 8 gauge plain wire so that it could hang around my neck with a loop out the front which very cleverly held on to a cup for me. He even went to the trouble to lace the wire with a fine round Platt out of leather giving it a very professional appeal.

That was three years ago and I use my "cup wire" every single day without fail. Because let's face it I can't hold a cup myself.

(Margareta: There is no doubt about No.8 wire. It's so damned useful. My father swears by it!)

I can't imagine ever receiving a bad present, let alone titling one the worst. Every Christmas present is special because I believe it's the thought that counts, not the gift.

Years ago Sarah and I bought a joint present for my entire family at Suplejack. We filled a large metal trunk with ice and seafood in Alice Springs and then sneakily poked in the station cold room telling everybody it was just knickknacks for the festive season. However on Christmas Eve after everyone had gone to bed we snuck into the cold room and drug the metal box through the house, placing it under the Christmas tree. So once everybody was sitting around the tree, we gave grandma and Grandad the code to the padlock which revealed lobsters, crayfish, oysters and too many yummy prawns.

(Margareta: Is seafood on the menu this year? Can we come for Christmas too?)

"When the dust settles" covers so many genres and I believe it is a great read for anyone who either needs a "pick me up" or a "reminder'" of all the wonderful things in life which can often be taken for granted. 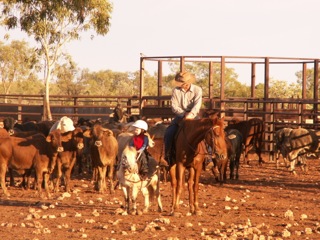 When I first heard of Rob and Sarah Cook, I was brought to tears by their love for each other and the resilience they both show in the face of adversity. Their incredibly 'got get 'em' positive attitude is an inspiration and lesson to us all that with love and tenacity we can endure almost anything. I have promised myself this book for Christmas.

If you'd like to be in the running for a personal note/Christmas card from Rob & Sarah (perhaps to go with the book you might buy someone special?) drop us a line below. (Margareta - Can I enter, Site Admin? No? Damn it